Terminology and the structural aspects of classical design.

The design needs to outwardly reflect how the structure goes together if it were built using the materials available back in olden times.

Using old materials it was not possible to span big widths, so it will look wrong if you have openings in the walls that are too wide.  You could with today's materials build strong columns that are very thin, but they would look wrong.

Terminology and the fundamentals

The following drawing is fundamental in that it shows the root of all the parts of the fancy facade.  Of particular interest are the following relationships...

Architrave - Columns support a beam across the columns.  The tops of the columns are wider than the beam supported.  The Architrave supports the Frieze.

Frieze - The ceiling beams rest on the beam so what you see are the end of the beams.  The Frieze supports the Cornice.

Cornice (made up of the Bedmold, Corona, & Cyma) - The roof edge details. 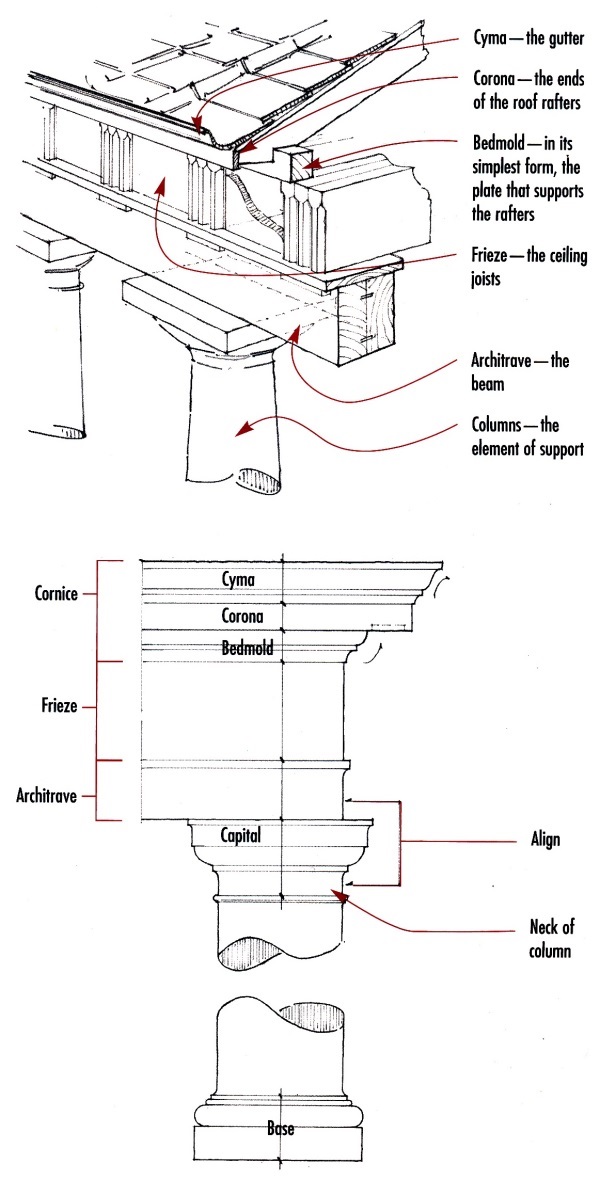 The study of the ancient elements of construction and how the fit together is called Tectonics.

In classical architecture, things are symmetrical (right/left) unless there is a very good reason for it not being.  Where possible, the tops of windows should align horizontally.  Often the tops of doors are also aligned with the tops of the windows, although occasionally you can deviate from that.

Orders aim to categorize the different ancient architecture styles, eg column style, but many other aspects too.  You will hear names such as Doric, Tuscan, Ionic, and Corinthian.  Personally I like the Tuscan style (as pictured below) because it is the cleanest look and the simplest to implement. 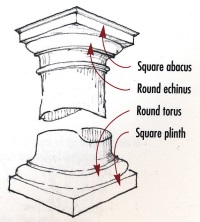 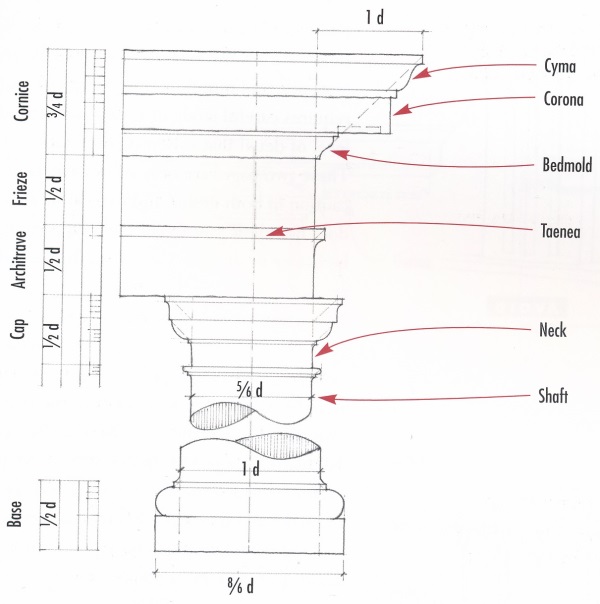 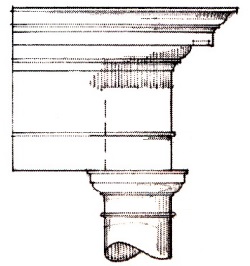 Railings above should also be aligned.  It is good to try to make the railings seem lower than the 36" that building code requires.  This can be done by including an additional horizontal rail that is 4" below the top rail.  Also the bottom rail can be 4" above the concrete.

The front face of the Architrave should align with the edge of the top of the column. 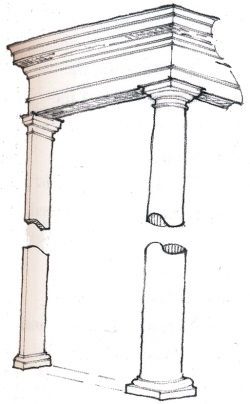 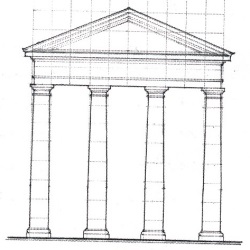 The pitch of the Pediment should be between 21.5 degrees and 31.6 degrees.  In the case of Roman architecture, the usual choice is 22.5 degrees.  Personally I chose to use 30 degrees.  The slope should be less than the roof (hip) slope.  If the front door has a sloped cap then its slope should be even less.

You must use a "Raking Cyma".  This basically means that the Cornice (Bedmold+Corona+Cyma) used on the horizontal is also used on the sloping roof.  The sloping part protrudes forward due to it having the actual roof on top of the Cyma. 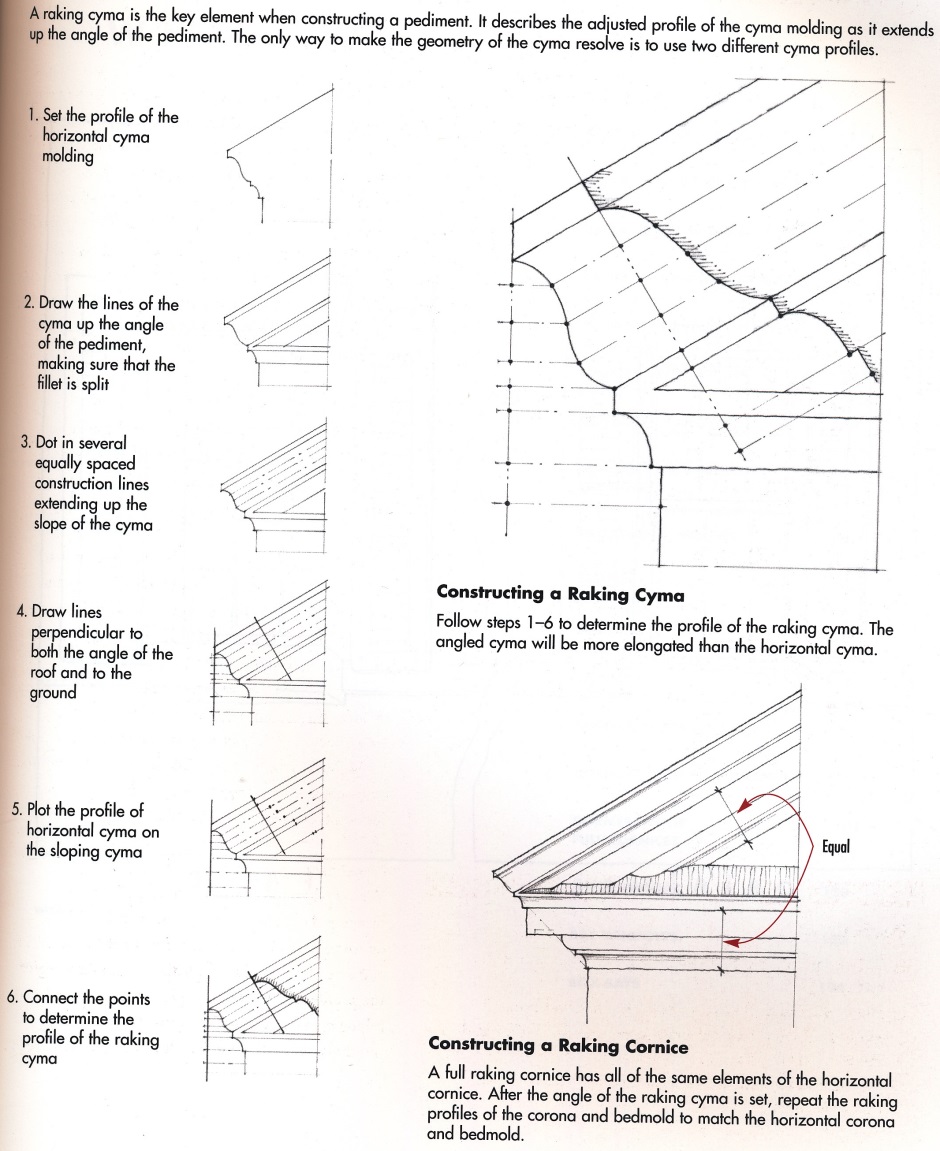 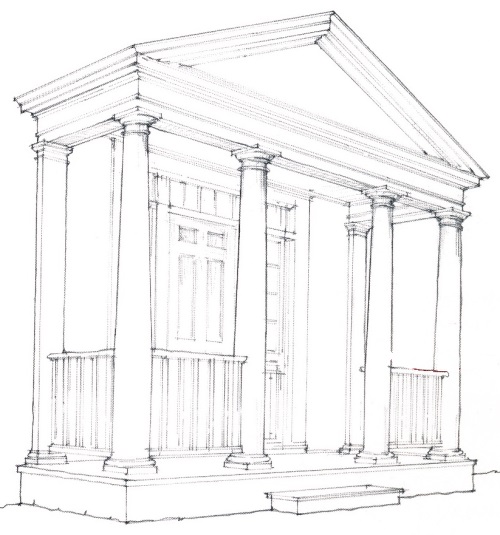