Listing all the things that a foundation needs to provide.

It turns out that the air/vapor/thermal building science involved in designing a foundation isn't actually that much different from designing a wall.  The foundation is just a continuation of the building envelope.  Imagine pushing a wall over from the inside so it now lays on the ground, and that's fairly similar to what you want for a foundation.  On the outside, ie the side closest to the wet soil, you want a layer to handle the liquid water, then you want insulation.  Then on top of that, ie closer to the inside of the building, you want to have the air barrier and the vapor barrier.  And finally on top on the inside you want the structure, ie the concrete slab.

One difference however with a foundation design is that drying cannot happen to the outside (because it's underground) so you need to make sure it can dry to the inside.  Putting a polyethylene sheet over your concrete slab on the inside would be a really bad idea (don't listen to a wood flooring salesman that tells you to do this).  If you are going to put something over the concrete slab then either make sure it has high permeability or provide a ventilated air gap.

A foundation needs to perform a fairly similar list of functions as a wall (listed in approximate order of importance with highest priority at the top)...

As with walls, the structure is best placed on the inside of the house envelope so it is not subjected to water problems.

There is lots of water in the ground, particularly if you are in a high water table area.  Not just is there static water, but also often it is actually flowing through the soil.  Static water is bad enough, but flowing water if it comes in contact with a warm surface will carry heat away.

The water control layer of the foundation is the outer defense against water getting into your building envelope.  The water screen for a foundation is typically a layer of crushed rock under the whole slab area of the house.  This lets the water flow away before it even comes into contact with the inner foundation layers.  It's also necessary to extend this drainage area in the ground all around the house so that the amount of water flowing under and around the foundations is reduced as much as possible.

There needs to be a well defined path for the water to get out from the layer of crushed rock (the water liquid control layer).  This means the water needs to get picked up by a drainage pipe that slopes downwards.  If your house is on a slope then it's pretty easy to keep the pipe going down hill until it can safely flow to the outside and away from the house.  If you don't have a hill then you will need to have the pipe flow downhill to a sump pump collection point and then pump it to the surface away from the house.

Also provided are a couple of layers of sealed polyethylene sheet to stop the water getting through.

Contrary to popular belief, there is air under a foundation.  It's in amongst the crushed rock, and what's more it's potentially bad air with radon gas in it.  You don't want that bad air getting into your building envelope and the air control layer prevents it from getting in.  Even if you think there's not much air flow happening underground, it's really a mute point because the function of an air barrier is typically performed by the same physical component as a vapor barrier (a 6 mill polyethylene sheet), so you're going to get an air barrier anyway.

Given that there isn't that much air flow underground, this is really about stopping any water from getting in.  The function is typically performed by a 6 mil (6 thousandths of an inch thick) polyethylene sheet.  The critical thing is that this forms a completely sealed "plastic bag" for the house to sit in.  That means that you need to seal up any places where pipes come up through the sheet.  When I say sealed, I really do mean completely sealed because water will be coming at the barrier with a fairly high pressure and it will find any holes.  If the plastic sheet is not as wide as your house, you may need to join it, so the join needs to be well taped up to seal it.  Ideally you should buy a huge sheet of 6 mil polyethylene sheeting so you don't need any joins.

Having a 100% sealed "vapor" control layer in your foundation to prevent any water migration will ensure that you do not have a wet basement.

In most areas, the ground temperature is significantly colder than the temperature you are heating your house to.  If you don't want the heat from your house to be lost to the ground then you will want to have insulation under your concrete foundations.  Most people just put the insulation under the concrete slab, but ideally from a thermal perspective, it should be under the entire concrete foundations including the footings.  You want to have a thermal break (ie insulation) between all the concrete of the foundation and all the soil that the house sits on and in.  The argument for polystyrene under footings is explored in more detail here .

It is good practice to provide ventilation for the layer of crushed rock that's providing the water control layer, but there is another reason why this is necessary.  The center of the earth is slightly radioactive and a small amount of radioactive gas permeates up through the ground.  It's worst in areas that have lots of granite, but many areas have radon gas to some extent.  Radon gas is lighter than air so it can accumulate in roof spaces.  Roof ventilation is a good technique for avoiding harmful gas build up, but even better is to catch the gas and vent it away before it even gets into the building envelope.  The same layer of crushed rock that collects the water can also (and will also) collect the radon gas coming up from the earth's core.  The water will collect and flow along the bottom inch of the crushed rock layer and the radon gas will collect and flow along the top inch of the crushed rock layer, trapped by the polyethylene sheet above.  If you provide a vent pipe from the top of the crushed rock layer then you can route the gas in a pipe up through the roof of your house and safely away.  It's another roof vent just like the sewer stack needs a roof vent.  The annoying thing about providing a radon vent is that it ideally needs to go upwards out of the capture umbrella formed by the footings and the slab.  That means it needs to go up through the polyethylene sheet, so it is a perforation through the polyethylene sheet that needs to be well sealed so water and gas cannot get through.

Given that there is not a radon problem in my area, I have decided to route the radon vent pipes under the footing rather than have it come through the slab.  This means that if I ever did have a radon problem (very unlikely in my area) then I would need a fan to suck out the radon as it is lighter than air.

The radon vent pipe also provides a way to route a high pressure water hose down into the under slab drainage system to clean it out if it ever becomes necessary (which it probably won't).

If you are in a high termite area then the other thing you can do is use poison on the soil under the house.  I have a few concerns about the health effects associated with using termite poison (so I don't use it), but at least the various layers of polyethylene sheet will stop the poison from getting into the building envelope.

Having this extra layer of polyethylene sheet violates the rule about never having more than one vapor barrier as that will prevent drying.  In this case however we will only be trapping a sheet of polystyrene insulation between the polyethylene sheets.  If any water is accidentally trapped it won't actually be a problem because polystyrene is not harmed by water.

Tree roots are best kept away from your house.  You don't really want them growing up through the crushed rock water drainage area.  You can help dissuade them from doing this using a sheet of geo-fabric.  You don't want this layer to be a waterproof layer because you want water to be able to get from the soil to the layer of crushed rock so it can drain away. 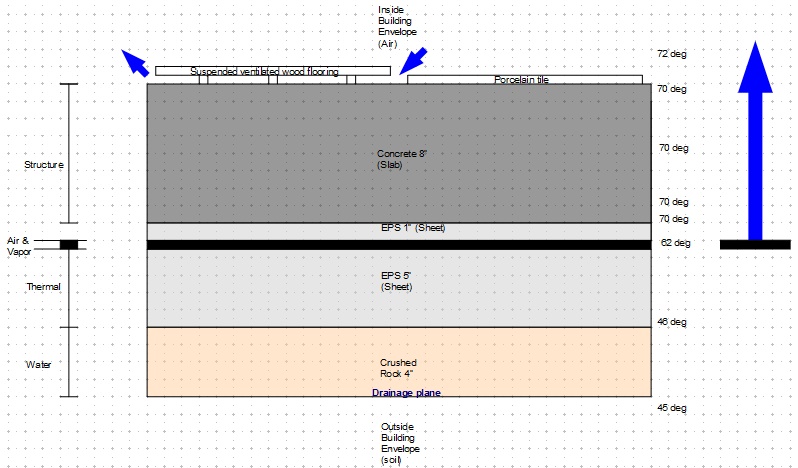