Round the outside is perforated drain pipe for additional drainage.

Outside the lower outer Form-a-drain

Round the outside of the footing trench there needs to be a 4" perforated drainage pipe, or as it's sometimes called, a "weeping tile".  The outside drainage pipe needs to be installed at this point in the build process so that crushed rock can be placed behind the lower outer Form-a-drain to balance the forces associated with filling the under-slab area with crushed rock.

Drainage 4" pipes will not have filter cloth sock

Many people say that 4" perforated drain pipe should be covered with a sock of filter cloth to keep soil from getting in and blocking it.  I prefer to leave off the sock and instead have a good arrangement of cleanouts, down which a long cleanout brush can be inserted and/or a high pressure hose pipe.  I worry that over the long life of the house that any filter cloth would itself become blocked and there would be no way to clean it.

Line the outside with geo-fabric

Prior to installing the 4" perforated pipe, lay down a thin layer of 1.25 inch crushed rock without fines for it to lie on.  Near the drainage outlets the bed should be about half an inch, but it should very gradually get thicker as it goes back in order to give the pipe a slight slope.  Something like 1/16" per foot is sufficient.  Certainly you should check that there are no places where the gradient is the wrong way. 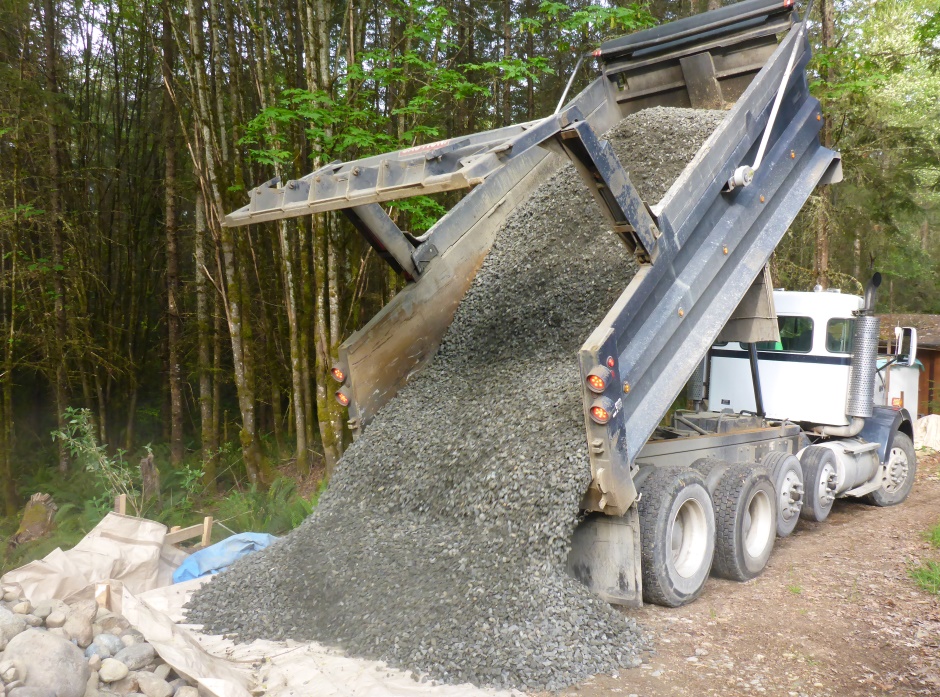 If you buy crushed rock that has not been washed after the crushing then you will need to wash it yourself (which is hard work). 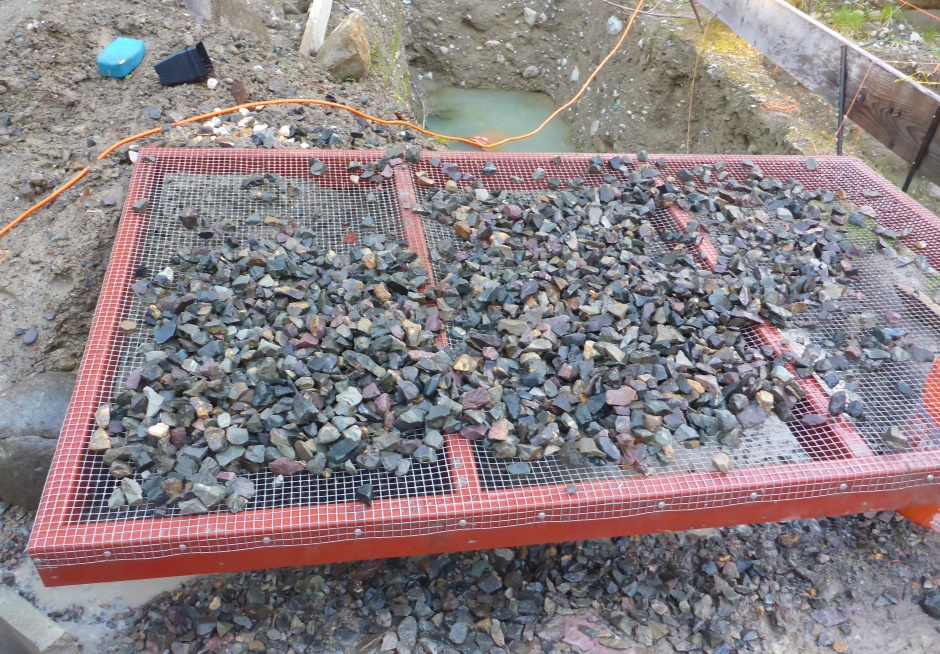 There are cleanout Wye fittings that connect to vertical 4" pipe.  Pairs of these are at the east and west sides as well as on the north west of the north portico and south east of the south portico. 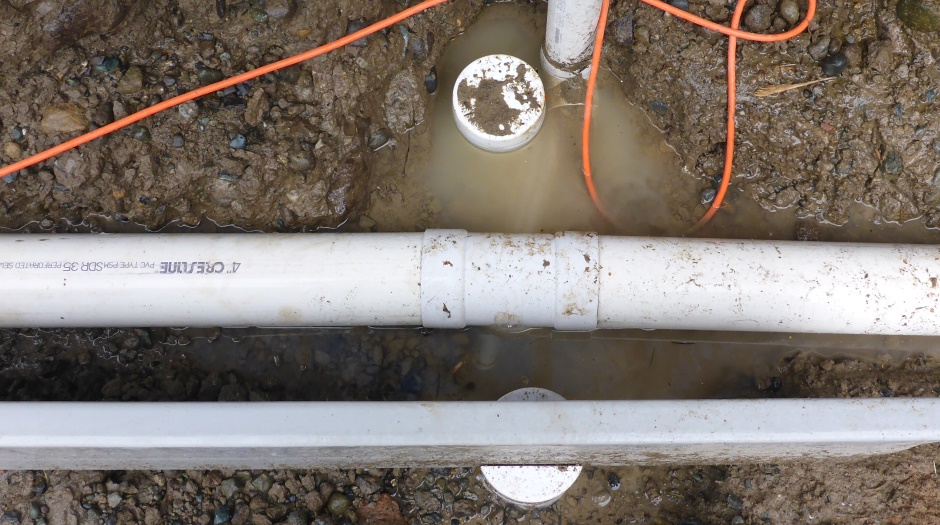 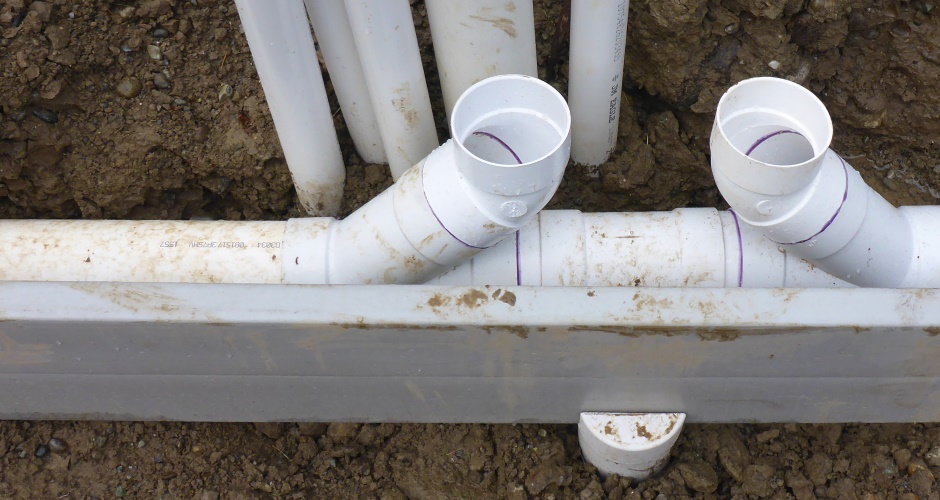 There are also cleanout pairs in the north west and south east corners. 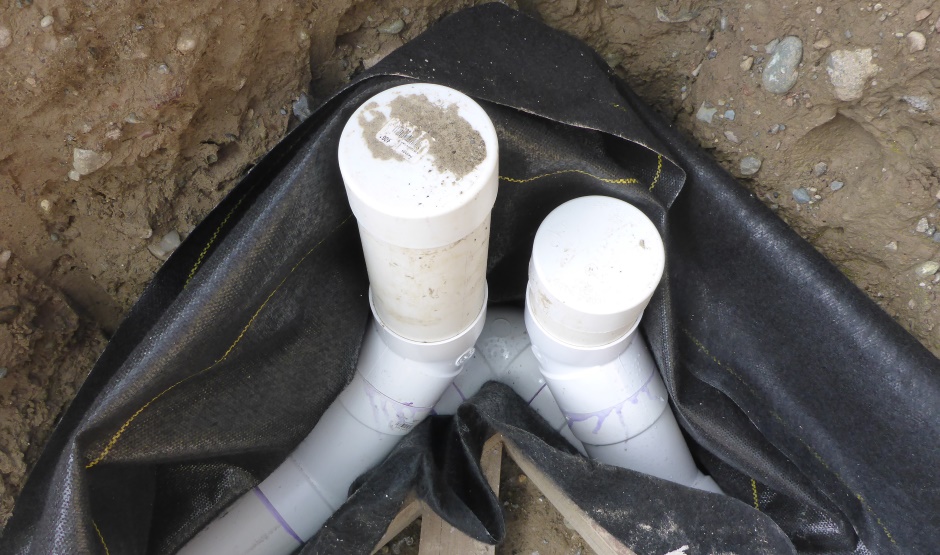 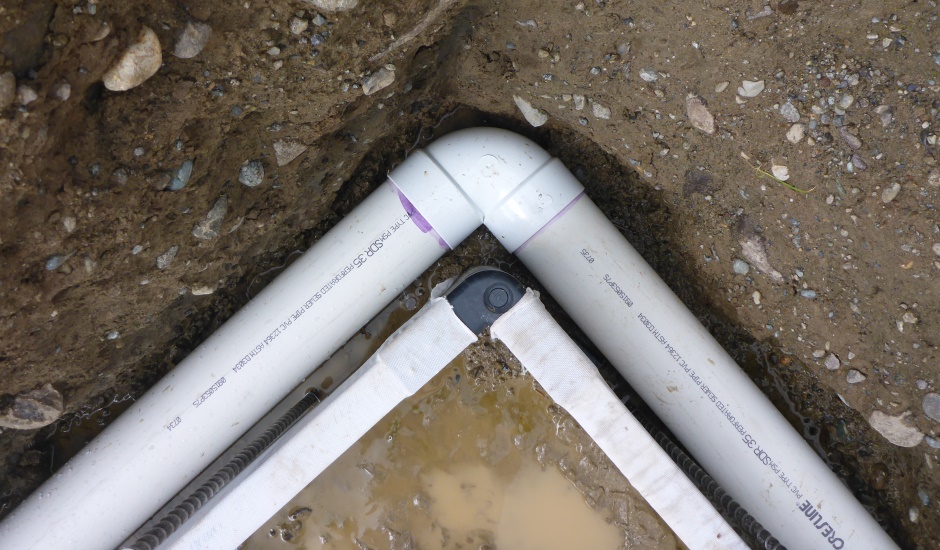 Note that you can glue together the piping ahead of the geofabric and bed of crushed rock as it is easy to lift up the pipe after it has been glued. 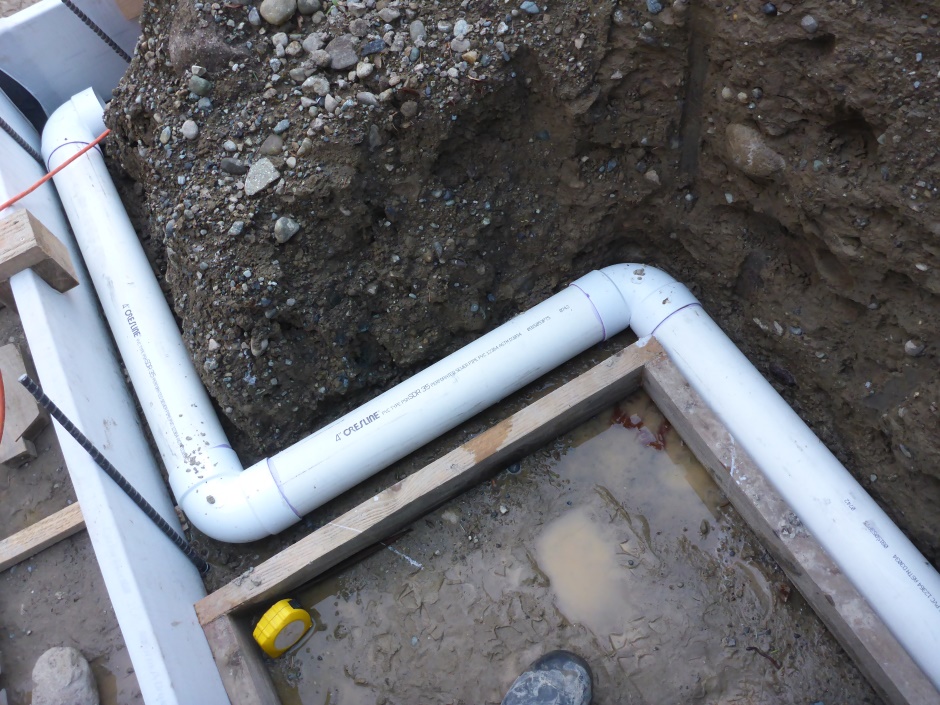 This is so that crushed rock can be put on the inside at the same time as it is added on the outside so that the forces can be balanced. 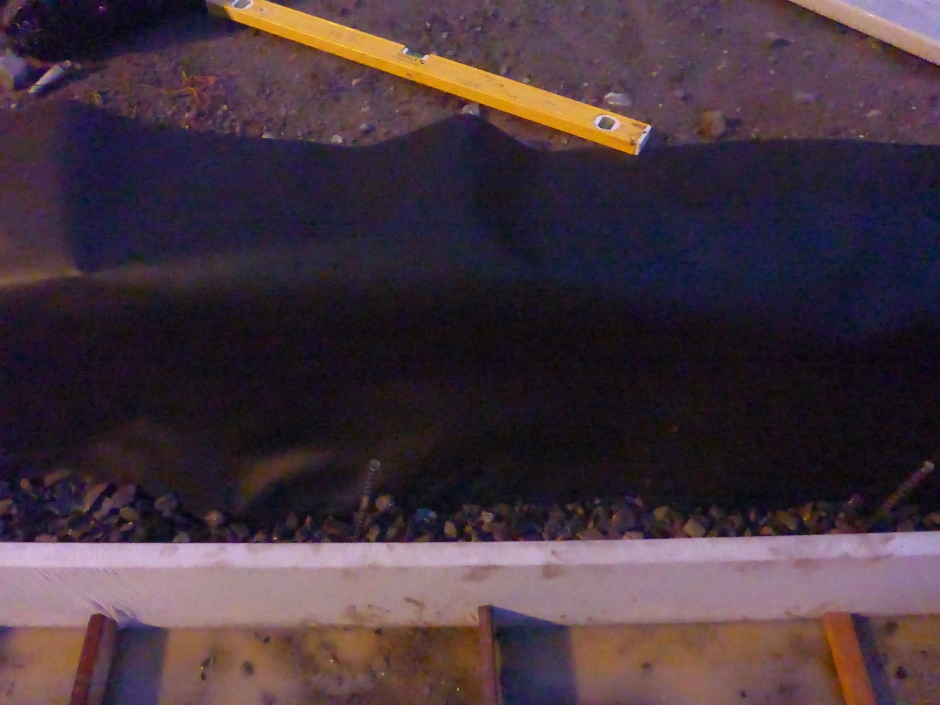 Add crushed rock to height of pipe (inside and outside)

Add crushed rock on top of the peripheral drainage pipe.  Do not at this stage add too much crushed rock or it will cause the Form-A-Drain to bend inwards.  Fold the geofabric over the top of the crushed rock to keep soil from dropping into it. 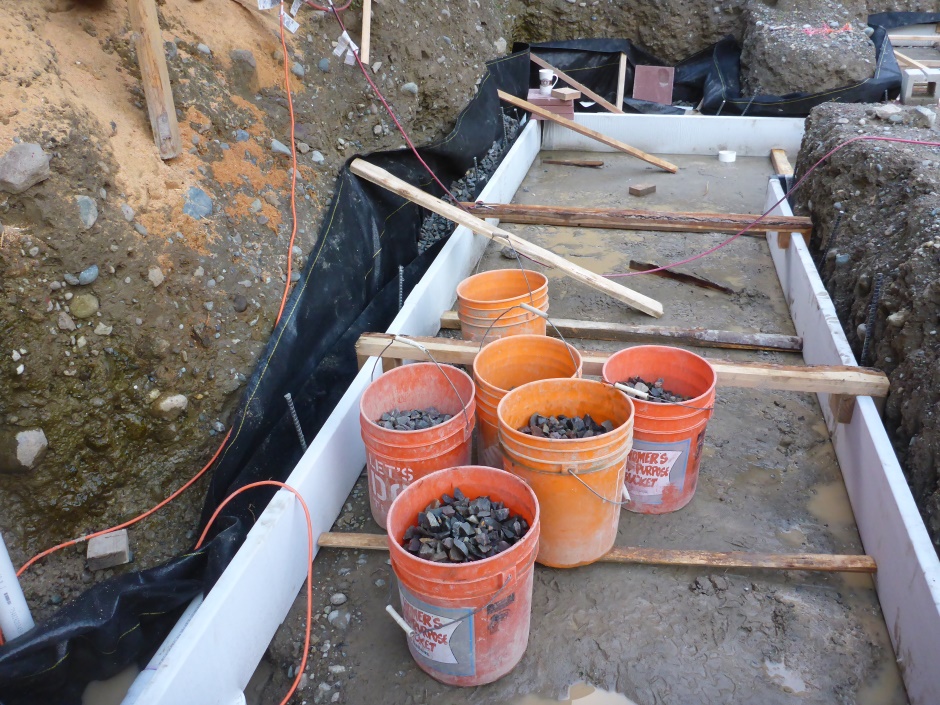 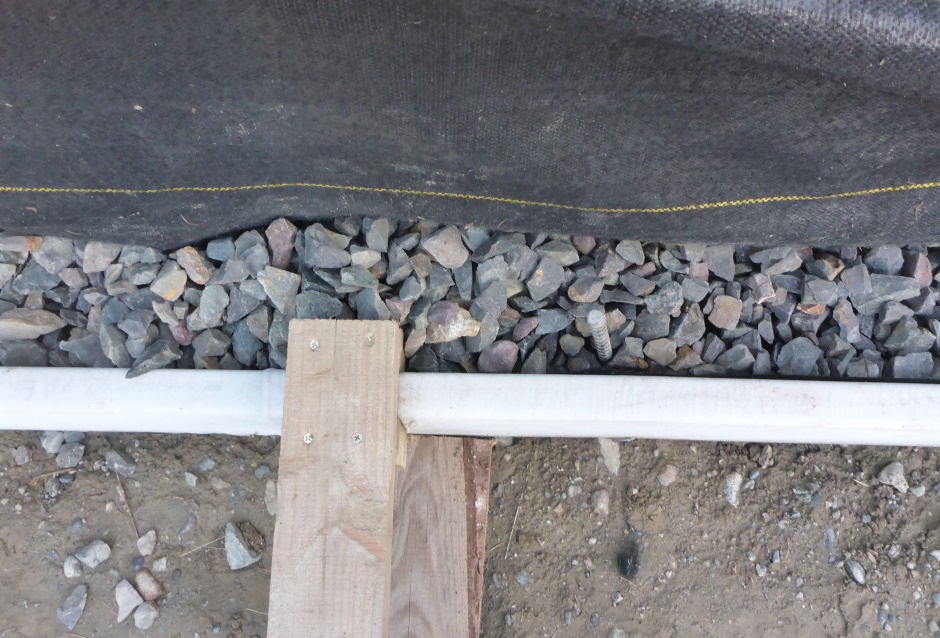 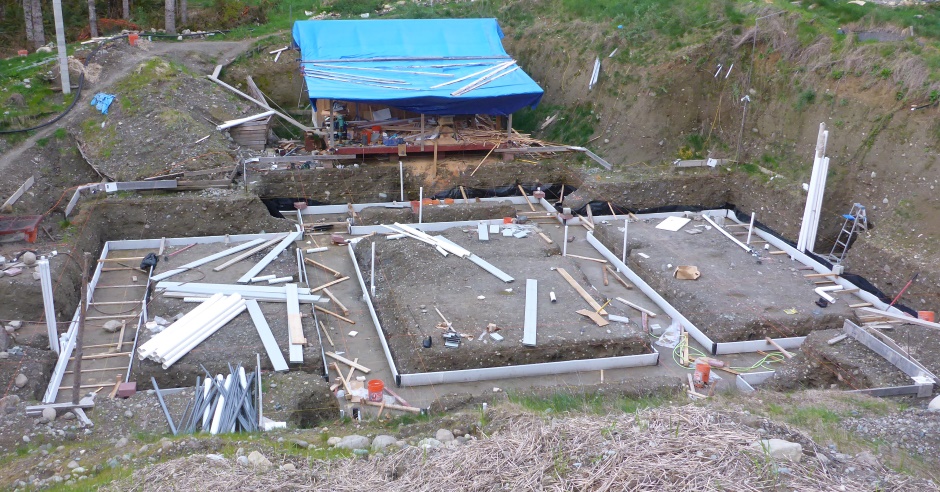 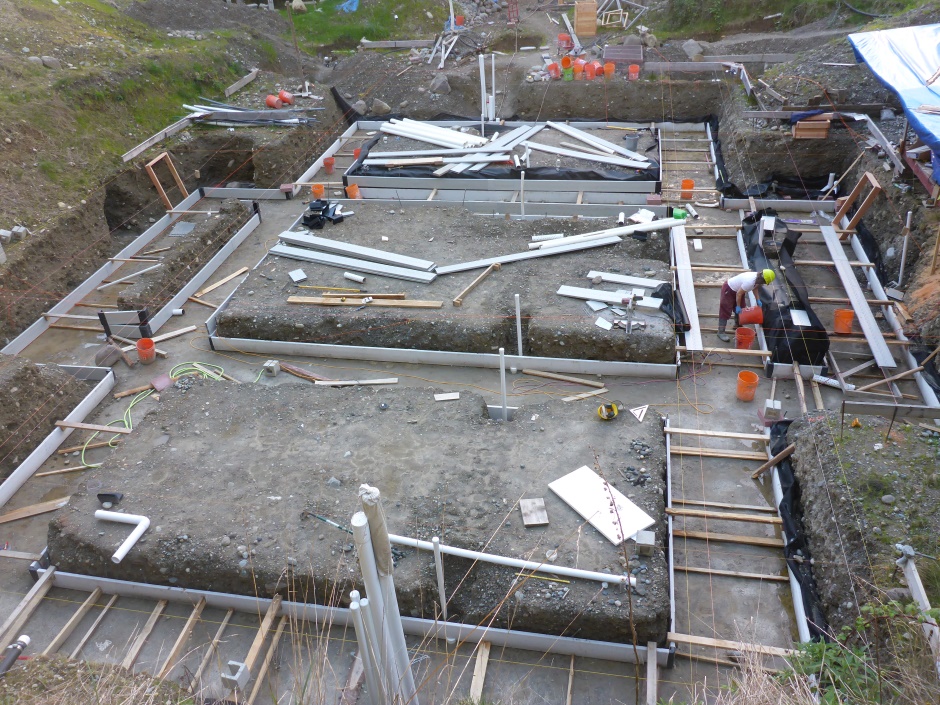